I love that Emacs notices merge conflicts in Bazaar versioned files, highlighting the differences in green and pink. It's a small thing, but I really miss this automation for when working with Git — I have to manually type M-x smerge-mode. 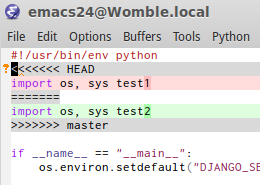 The feature works by looking for conflict files and markers whenever you open a Bazaar versioned file:

The above looks a little complicated, but the important part is the line (smerge-start-session). This starts smerge-mode to highlight merge conflicts.

Let's do something similar with Git by defining a function vc-git-find-file-hook:

Emacs vc-mode has a standard interface for version control systems, so simply defining this function is all we need to do. Emacs will look for and run the function if it exists (it doesn't by default).

Similar to the Bazaar version, this function looks for conflict marker text in the file, and starts smerge-mode if it finds any. The Git version is shorter because Git deals with conflicts differently, and also because I haven't hit any edge cases… yet.